As I’m sure many of you are well aware, Five Fingers of Death was a cornerstone film that marked the initial burst of martial arts movies in the United States. There are plenty of articles and more scholarly resources that analyze the social and cultural conditions in the US that allowed for this to happen and I won’t delve into those too much here – although I would suggest if you are reading any reviews or articles of the time period then take those with a grain of salt as they tend to use some terminology and language that might seem problematic in a 2020 lens. I’ll leave it at that. The Shaw Brothers hit film, King Boxer, was released roughly a year later in the US under the more provocative title, Five Fingers of Death, and it laid the groundwork for the success of Bruce Lee’s Fist of Fury just a few months later. Not only was this film a hit, it was an international hit and, as I remarked above, became a cornerstone for the kung fu craze that would dominate pop culture for the next couple of years.

This makes King Boxer, which is the title that I will use from this point on, a unique film in the history of the genre. While there is a lot to digest in terms of what set this film up to be the juggernaut it was (a surprising success that saw it as the #1 film in the US for a week), for this article I want to talk about the film and its creative components more than its history. To set that stage, it’s important to understand the obstacles that King Boxer cleared on its way into cinematic history. From there, it’s all about the film itself.

As the Shaw Brothers studio transitioned the bulk of their film output from wuxia swordplay films to crash and bash kung fu capers, many of the tropes remained the same. It was just the style and filming approach that evolved. King Boxer is hardly the first film of its type and it’s notable that in 1970 (close to two years prior) Jimmy Wang Yu really set the stage and formula for this type of film with his directorial debut, The Chinese Boxer. It’s also notable that Lo Lieh, our hero in King Boxer, plays the Japanese villain in the former film, but that’s something to examine a bit. The blueprint is set and King Boxer doesn’t deviate too far from it. Our hero must leap through a few proverbial hoops, learning skills along the way to defeat the increasing amounts of villains and navigating the politics of rival schools and foreign foes. There’s a couple of romantic subplots, some key moments of revenge, a moment where his hands are beaten to a pulp, and – just for shits and giggles – they throw it all over the background of a pending martial arts tournament.

Could one ask for more? It hits all of the key categories to deliver the thrills and spills for its audience and doesn’t challenge the plot or narrative much. Granted, the martial arts genre isn’t necessarily known for its truly innovative plots, so one is more apt to grab onto the other aspects of the film. For this one, the plot and narrative are simple enough to easily understand on one watch and it’s through the execution where the film finds its messages and strength.

The crux of why this formula works for King Boxer is the full out ass kicker of the title, Chao Chih-Hao, played by the incredibly versatile Lo Lieh. While I won’t dig too far into Lo Lieh’s illustrious career, I will eventually get to write a more in-depth article about some of his best and worst films, he’s the perfect casting for this film. Outside of perhaps Ku Feng, Lo Lieh is one of the genre’s most diverse and talented actors who can essentially play any role.

The previously mentioned The Chinese Boxer features him as the foreign villain, not unlike the villain of this film in some ways, but here he plays a very convincing and heartfelt “everyman.” Between being charmingly torn by pending romantic relationships, his focus on his familial connections to his teachers, and the dedication he has to his craft – that being extreme ass kicking with his deadly hand to hand combat, it’s easy to build a relatable connection to the audience through Lo Lieh’s honest performance. It’s balanced through the increasingly evil and destructive villains, one of which is beaten by him early on and learns the mistakes of his ways to change sides, and adding in a revenge plot only increases his relationship with the audience. Not only do we want him to win, we want him to decimate his antagonists. Lo Lieh is a linchpin for the film that carries the emotional weight of its traditional story of rising to the challenge and without him, King Boxer wouldn’t be the film it is.

Although it wasn’t my intention, it would seem fated that of my first handful of written pieces for 36 Styles two of them would be directed by Walter Chung Chang-hwa. The first was for his final Hong Kong film, Broken Oath, but it’s fitting to take a step back and look at his most iconic film from his brief time with Shaw Brothers. Side note: I also highly suggest checking out another Shaw film he directed, Heads for Sale, as that one is delightful.

What makes this director a key factor in the success of King Boxer is that his knack for style is one that presents itself in subtle ways. While the blaring siren sound of Lo Lieh’s hand attack – a now relatively infamous sound queue thanks to Tarantino’s Kill Bill Vol. 1, and the bright red color of our hero’s hands certainly invoke a more stylized film, they stand out because the rest of the film doesn’t lean that far into that territory. King Boxer is grounded. Chang-hwa intentionally crafts it that way. Even when the film does become more stylized, the lighting in many of the night sequences for example or during some of the gimmickier battles, it never loses grasp of the emotional center of the character and his plight. It spends enough time with the villains to understand their motives, but quickly balances it out with our hero and his increasingly vicious obstacles to overcome. The style is there, as is evident in quick pacing of the fight sequences which are gorgeously choreographed by Lau Kar-Wing and Chan Chuen or with large swaths of the final act and its set pieces, but they stand out by Chang-hwa’s intentional grounding of the rest in reality. It’s a striking artistry that delivers.

It’s not a shock to anyone on the site reading this article that King Boxer deserves the classic status that it’s given. If you’ve seen the film, you already know this, but it’s always nice to have a reminder of why the artistic merits of the film created the foundation for it to be the historical juggernaut it was – for both Hong Kong and the United States. Through it’s thoughtful writing, incredibly charismatic and honest portrayal of a hero, and a director that knows how to balance it all, King Boxer holds up to this day. It’s never a film that uses flashiness, gimmicks, or other exploitative elements to earn its entertaining value, but it does it with hard work and expert execution. Like it’s reluctant protagonist, the film never intended to be the hero – but the circumstances and effort made it one. 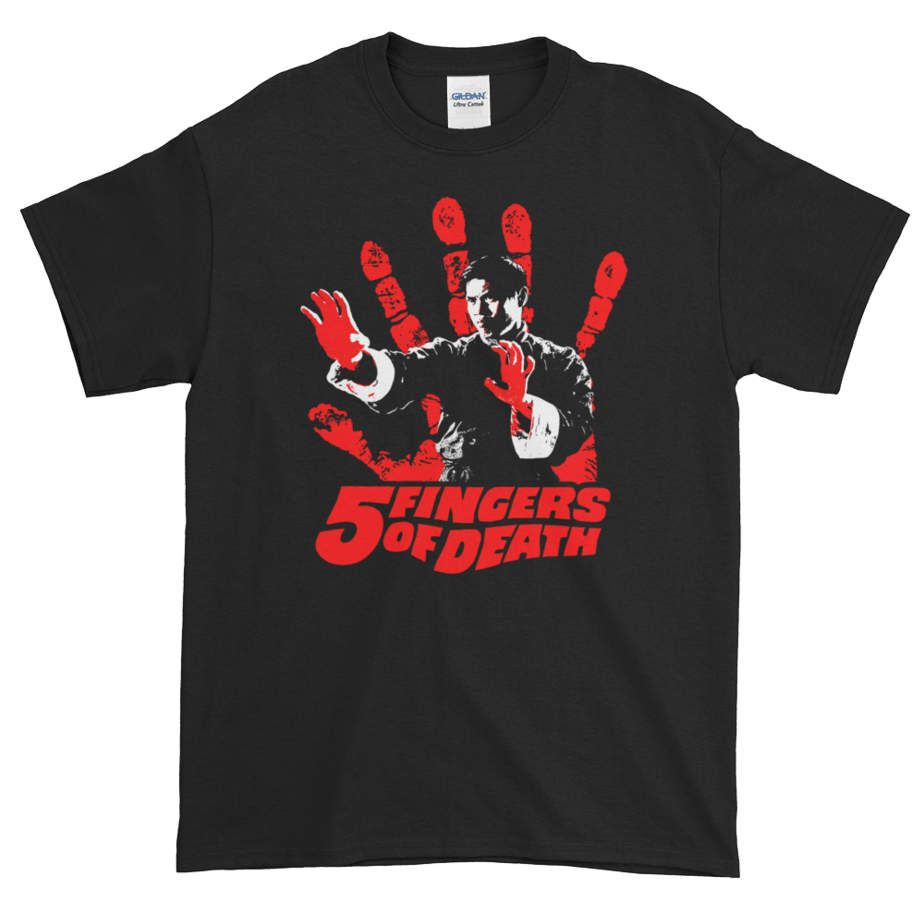 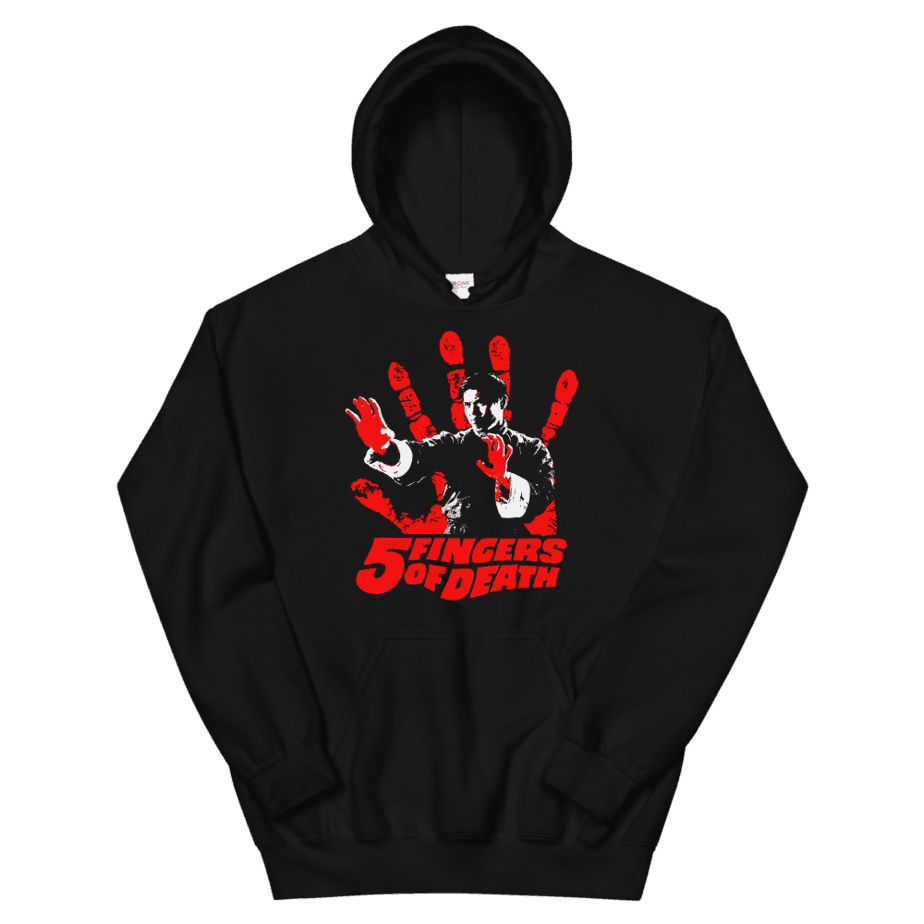 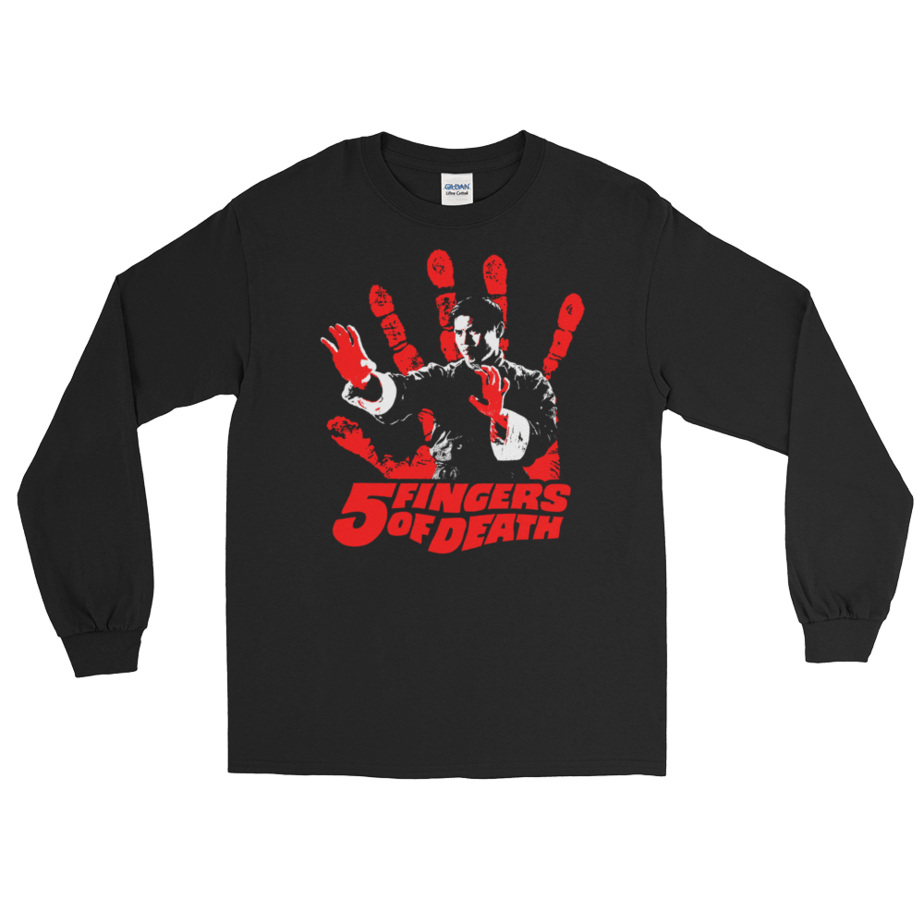 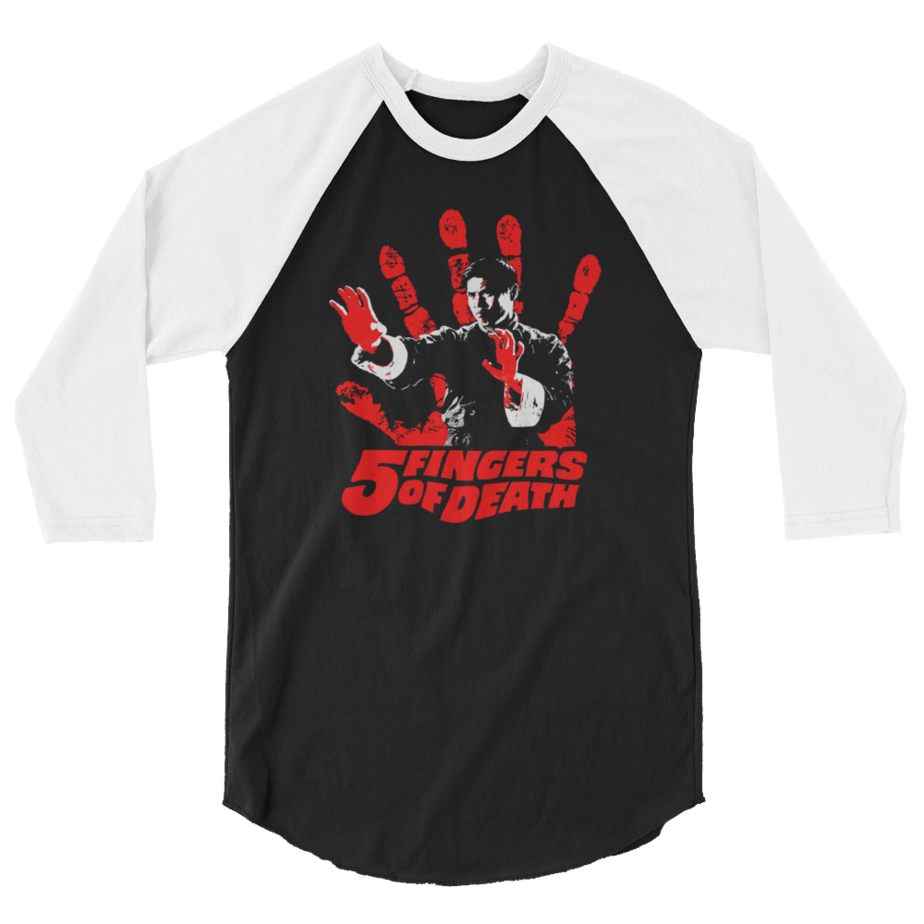 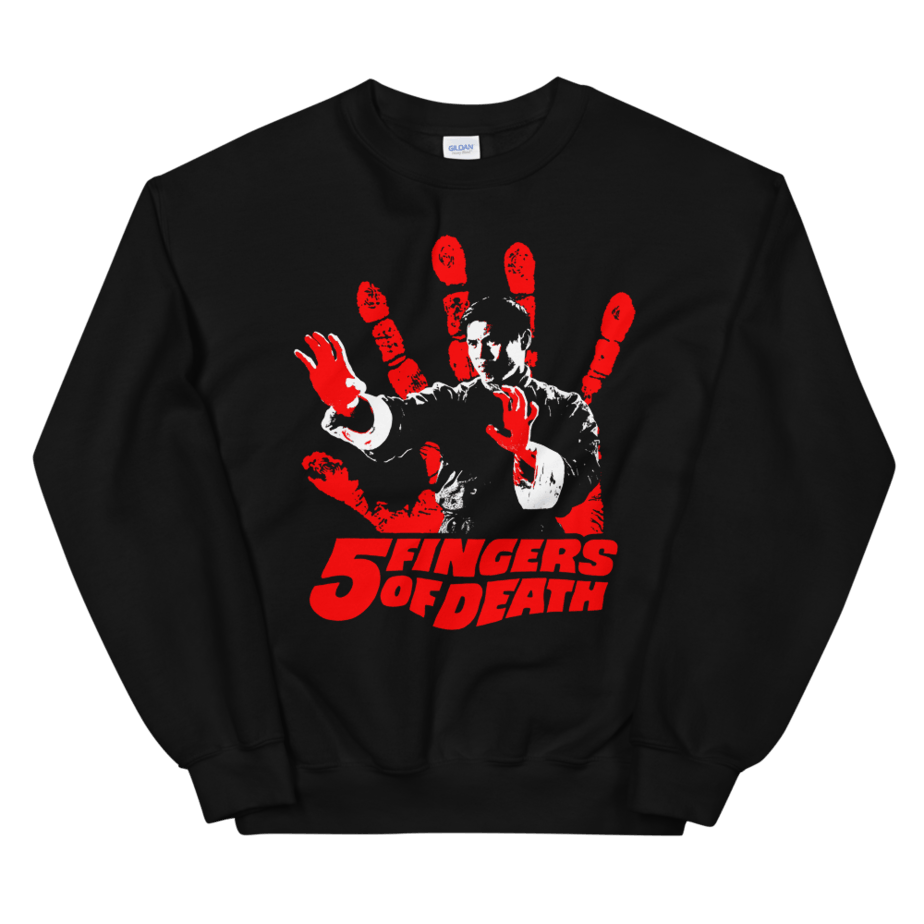 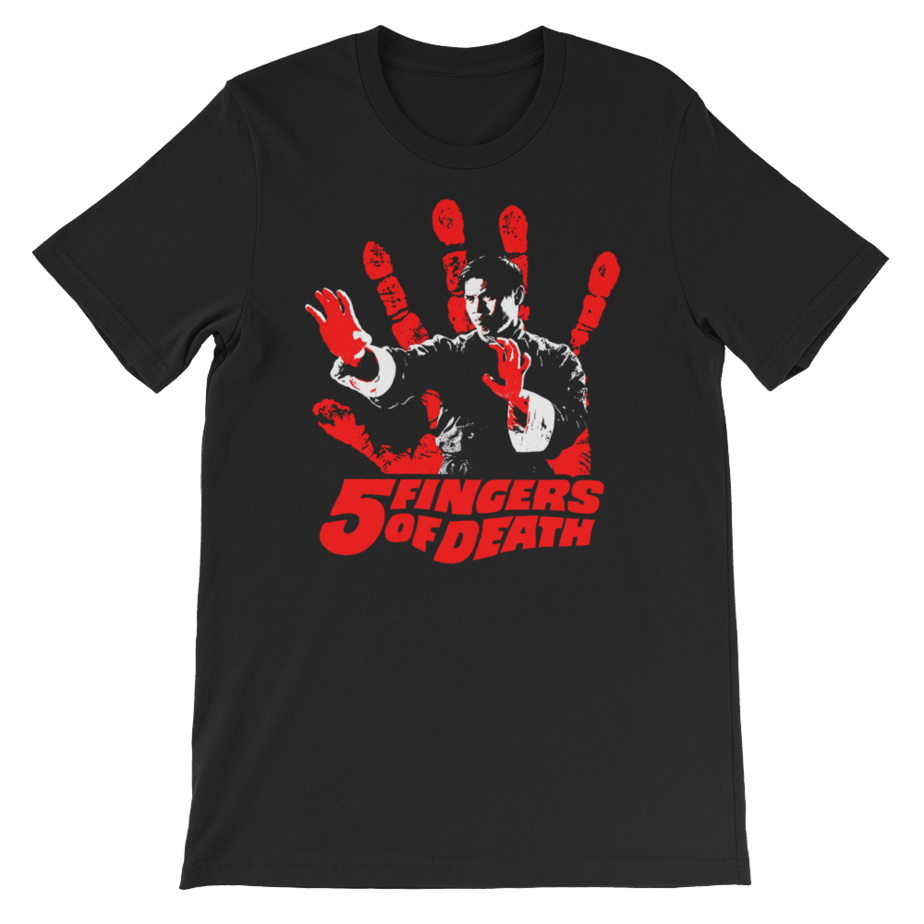 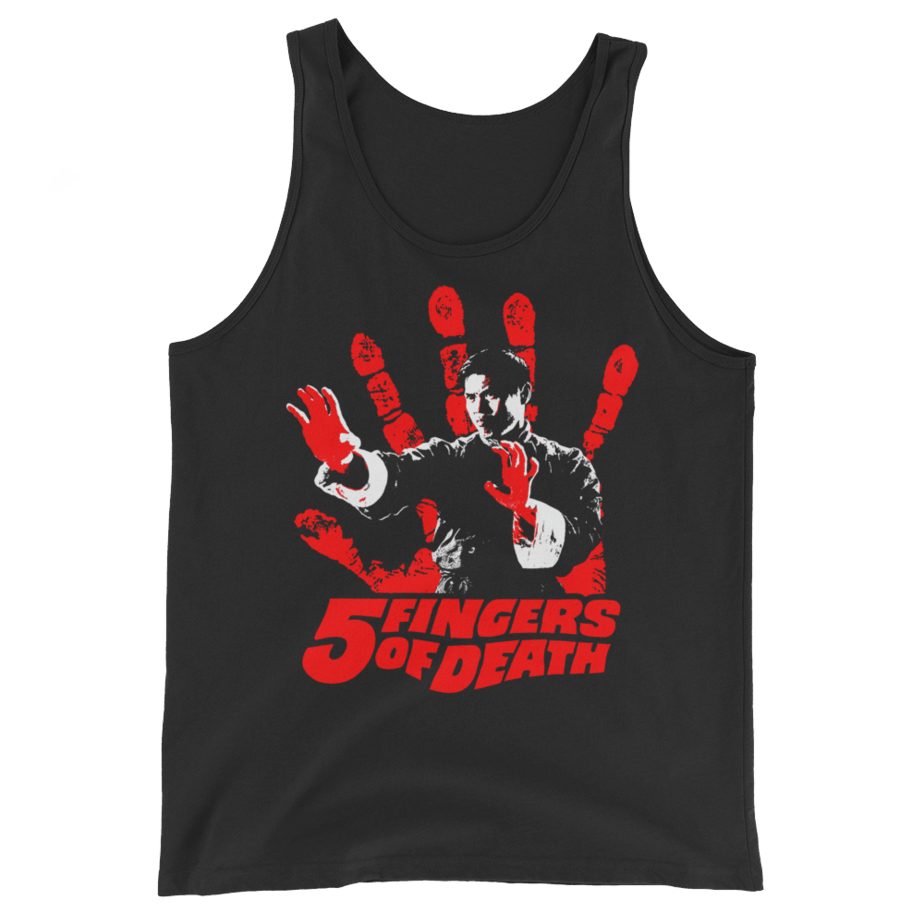 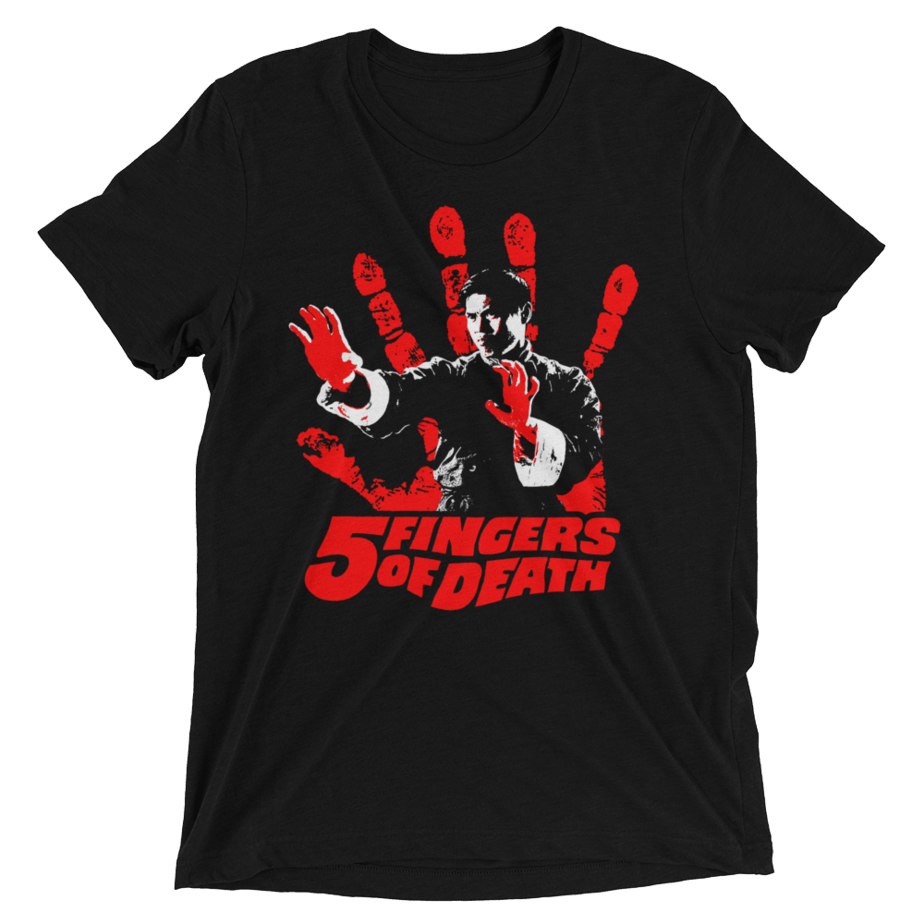 36 Cinema Screening ‘Heroes of the East’

Kung Fu Bob, the man behind many of the most popular 36 Styles shirt designs is a tremendous artist, that has been producing visually stunning work for many years. He has produced not only shirt designs, but prints and posters,...

END_OF_DOCUMENT_TOKEN_TO_BE_REPLACED

Here is a minimalistic design catered to those who like black and white photos, Lo Meng, and Shaw Brothers entertainment. There will be some more 1 and 2 color designs coming out in the near future, more in the style of our …

END_OF_DOCUMENT_TOKEN_TO_BE_REPLACED

Appearance and Duplicity in ‘Roving Swordsman’

“The good thing about working for big studios was that you got classy, quality support. Even if you asked for the moon, they could get the moon for you, which was amazing” raved Chor Yuen about Shaws.

END_OF_DOCUMENT_TOKEN_TO_BE_REPLACED

One thought on “King Boxer’s Five Fingers of Death”