36 Cinema Screening ‘Heroes of the East’

Kung Fu Bob, the man behind many of the most popular 36 Styles shirt designs is a tremendous artist, that has been producing visually stunning work for many years. He has produced not only shirt designs, but prints and posters, as well as book covers, and most recently many blu-ray covers for several different release companies. Not too long ago, Bob was approached for some custom work, and this is how it went down.

So… I get a call. “RZA would like you to do some Shaw Brothers artwork.”

Cut to my jaw hitting the floor. LOL

As if that isn’t crazy enough, it just so happens to be for my favorite Shaw Brothers film, HEROES OF THE EAST (the first kung fu film I showed my wife)!

So here’s why: RZA has a new thing called 36 Cinema that shows classic kung fu (and samurai) films and he and other guests do live audio commentaries for them. This Saturday (yes, in less than two days) RZA and Dan Halsted (HK cinema expert, renowned 35mm film collector, programmer for Portland’s Hollywood Theater, and super cool and nice guy) will be doing one for HEROES OF THE EAST. To promote it they had me create new poster artwork for the film, and they will be selling the artwork on their site as posters and T-shirts. Also, they are offering a Limited Edition version of the poster signed by the RZA himself. Only 36 available, get yours before it’s gone!

Yesterday there was an article about RZA’s upcoming new music, and they mentioned the 36 Cinema thing and showed a picture of my art… in Rolling Stone! Rolling freaking Stone! Yeah, I started reading that magazine when I was about 13, so this was a huge thrill for me.

Anyway, if you love kung fu please help promote the Saturday event and the 36 Cinema site by sharing this post and info here and on your other social media platforms. Thanks very much in advance. And hope you’ll join the fun and give the commentary a listen. RZA and Dan both really love the genre and know their stuff.

HEROES OF THE EAST Poster – Work in Progress 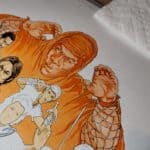 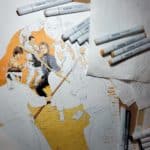 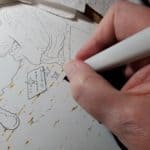 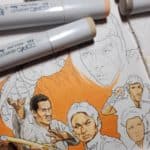 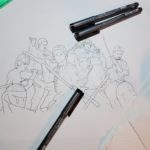 Here is a minimalistic design catered to those who like black and white photos, Lo Meng, and Shaw Brothers entertainment. There will be some more 1 and 2 color designs coming out in the near future, more in the style of our …

END_OF_DOCUMENT_TOKEN_TO_BE_REPLACED

As I’m sure many of you are well aware, Five Fingers of Death was a cornerstone film that marked the initial burst of martial arts movies in the United States. There are plenty of articles and more …

END_OF_DOCUMENT_TOKEN_TO_BE_REPLACED

Appearance and Duplicity in ‘Roving Swordsman’

“The good thing about working for big studios was that you got classy, quality support. Even if you asked for the moon, they could get the moon for you, which was amazing” raved Chor Yuen about Shaws.

END_OF_DOCUMENT_TOKEN_TO_BE_REPLACED

Create an Account
Start typing to see products you are looking for.
Shop
Sidebar
0 Wishlist
0 items Cart
My account